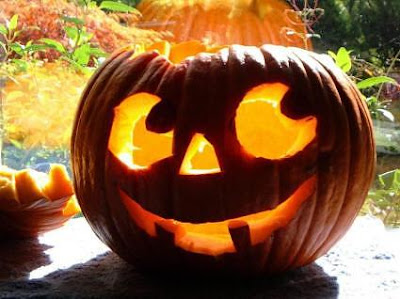 So last Halloween, if you can recall, I posted an entry and aired a radio segment on how to avoid the messiness of the season’s tradition- pumpkin carving. This year, however, I’ve decided that confronting the untidy task is a must! Carving Jack-o-lanterns is a fun project for our kids and we can make delicious snacks out of the remaining seeds when the lantern is lit and the mess is cleaned up. So here, I have put together a few reasons why we should welcome one day of chaos in the kitchen during this Halloween season:

Everyone likes a good monogram so why not get creative with your pumpkins and carve your family’s initials into this year’s Jack-o-lantern. Take a look at these sorority pumpkins that inspired my monogramming idea! It’s so simple and they will definitely stand out amongst the others’ to really impress your trick or treaters!

This should be reason enough for us to want to carve our pumpkins this year! Pumpkin seeds are a tasty treat and so easy to make. Here is a recipe that I found from Martha Stewart’s friend, Emeril. Try just one batch of these and you will fall in love!

The directions for baking a variation of pumpkin seeds that you might even take on as a tradition:

-Preheat the oven to 350 degrees F.
-Spray a baking sheet with nonstick cooking spray. Combine the pumpkin seeds with the garlic
powder, salt, crushed red pepper, and black pepper on prepared baking sheet and toss to
combine.
-Bake for about 15 minutes, or until seeds are crispy and light golden brown.
-Remove from the oven and stir with a spatula or wooden spoon to release any seeds that have
stuck to the baking sheet, and cool completely before serving.
-Roasted seeds will keep in an airtight storage container for up to 1 week.

Cook’s Note: recipe may be scaled up proportionately.

Now that we have these three great ideas, I think we should relax about the dreaded mess and replace the thought with excitement! Let’s get carving!

This error message is only visible to WordPress admins

Please go to the Instagram Feed settings page to create a feed.