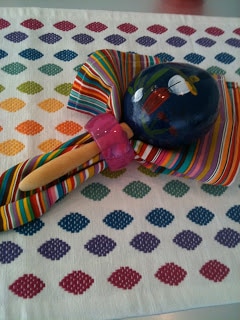 My sister Kari loves being a part of her supper club but she gets stumped when it comes to setting the table. She always calls me when she gets her date assigned and I always jump to the chance to set her table in her cool and contemporary condo. Her supper club is made up of all girls and they are all in their twenties so it gives me the liberty to have a little fun! We had a great time together setting this table and her placed looked so colorful, cheerful and festive.

She decided to serve Tex-Mex food that was prepared in her open kitchen. She had 12 guests and her table only seats eight max so she set up six at the table and the other

six at her kitchen bar. She didn’t want to make anyone feel left out by seating them at one or the other so she devised a very clever plan to give people their seating assignments: Each place setting had a maraca in the napkin holder. The matches to the maraca pairs were all piled in a bowl so as people entered the party they selected one.

It set a festive mood for them and they were all playing and singing with them. When it was time to sit down for dinner, they found the match at one of the place settings!
She already had really cool place mats and napkins from Crate and Barrel that were the perfect “flavor” for the evening. The colors were fantastic and bright and her simple white china was chic and simple on top of the colorful linens. She used the table runners that co-ordinated on her bar area so the two spaces felt connected.
The flowers were a lot of fun! We found fun green flowers that looked fantastic with her linens and placed them randomly in her fun white vases. When her guests arrived, one of them noted that they were the official flowers of the Olympics this year! When any Olympian received a medal, they were given a bouquets of these fantastic green mums! The Olympic bouquets have such a cool story behind them. Just Beginnings Flowers and Margitta’s Flowers from Surrey, British Columbia were chosen from 58 florists were in contention to make the bouquets. The International Olympic Committee has set a very strict protocol for the bouquets stating that they must be 20 to 30 centimeters tall and 25 centimeters across. June Strandbert designed the bouquet and is the founder of a really inspiring program that teaches floral design to women who in prison, recovering from addiction or have been victims of abuse. They produced 1800 bouquets!
Tagged floral arranging, Flowers, seated dinner, Tables settings
← Family Meals and Family ValuesPink in the Rink →

This error message is only visible to WordPress admins

Please go to the Instagram Feed settings page to create a feed.